People of Himachal Pradesh possess natural talent to excel in sports and the Government of India is determined to provide every facility to utilize it. The Union Minister for Youth Affairs & Sports and Information & Broadcasting Shri Anurag Thakur said this today after laying the foundation stone of Hockey Astroturf at Government Senior Secondary School in Majra, Sirmour (Himachal Pradesh). 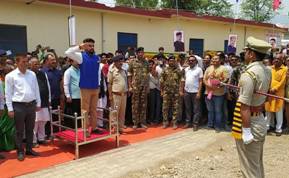 Shri Thakur said that Rs 6 crore would be spent on this hockey turf which will have facilities like girls’ hostel for players, change rooms, toilets, coaching facilities etc. He suggested that talent hunt programmes can be organised by the state government to recognise budding players in different areas of sports in the state. The minister said five traditional games namely Gatka, Kalaripayattu, Thang-Ta, Mallakhamba and Yogasana would be part of the upcoming Khelo India Youth Games 2021 and the Government of India is determined to popularize them on the global platform. The traditional sports too can be recognised in the state, added the minister. He said an indoor stadium will be built in the Paonta Sahib. 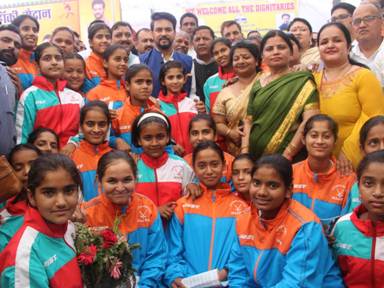 Two national records and 76 previous records of University Games were broken in the recently concluded Khelo India University Games in Bengaluru this year which show the ample amount of talent in our youth, said the Minister for Youth Affairs and Sports. The Minister for Youth Affairs and Sports also presented a scooty to Divyang from village Kota in Shillai Tehsil Kuldeep Singh on the behalf of the District Red Cross Society.

The two-day power packed tour of the Minister in the region comprising the states of Haryana, Punjab and Himachal Pradesh concluded today. Shri Thakur on Saturday  along with Haryana CM Shri Manohar Lal and other dignitaries launched logo, anthem, Mascot and jersey of Khelo India Youth Games 2021 at Indradhanush Auditorium in Panchkula (Haryana) subsequently flagging off the projects at Sports Authority of India (SAI)’s Netaji Subhash National Institute of Sports in Patiala (Punjab).

A COVID positive mother should continue to breastfeed the baby but is advised to keep the baby at a distance of 6 feet from her when she is not breastfeeding – Dr Manju Puri, Head, Department, Obstetrics and Gynaecology, Lady Hardinge Medical College, New Delhi