Shri R K Singh, President of the ISA Assembly noted that India has taken the globally acknowledged initiative of energy transition. It is time now for all countries to come together and contribute to solve each other’s problems. 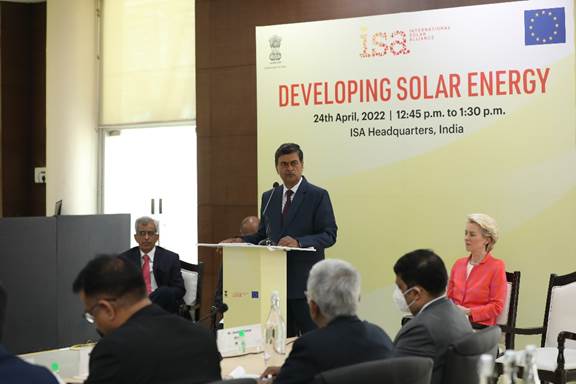 President of the European Commission, in her keynote address, said, “India and the European Union are closely aligned in the fight against climate change. Both India and the EU have embarked on their way to net zero emissions. And in both India and Europe, solar energy will play a key role to get there. Now, we need to step up EU-India cooperation in developing solar energy. We can learn from each other how to finance, promote, and deploy solar energy and how to secure global supply chains and material needed for solar panels.” 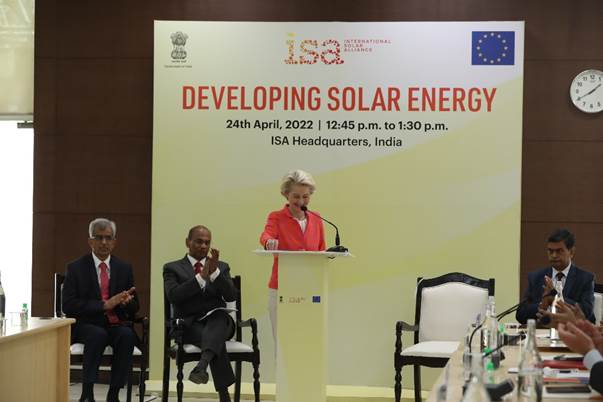 Secretary, Ministry of New Renewable and Energy, Government of India stated thar the global community is reposing increasing faith in International Solar Alliance as a critical instrument in the fight against climate change. He added that the visit of EC President to ISA headquarters will lead to a renewed commitment from countries across the world to strengthen ISA’s efforts. 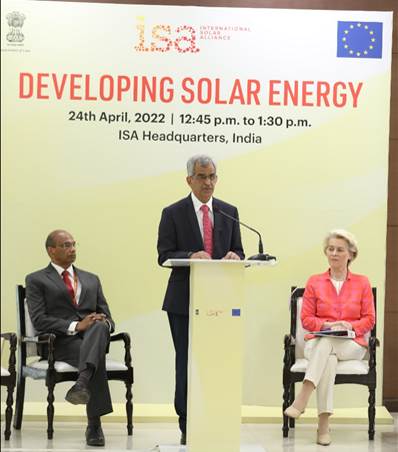 During the discussion, DG, ISA said that the ISA resonates with the EC’s spirit of, ‘no person and no place left behind.’ He added that India’s collaboration with the EC and with the EU Member States is built on our synergistic multiplier effect, through making solar accessible, affordable, and available equitably.

The European Commission and ISA have had a strong collaboration ever since the establishment of the International Solar Alliance. At COP24 in 2018, the EU and the International Solar Alliance signed a joint declaration to promote solar energy. European Commission Executive-Vice President, H.E. Frans Timmermans, announced a project funded by the EU, worth 1 million Euro during his participation in the ISA Assembly in October 2021, aiming at further strengthening the engagement of the EU, the EU Member States, and EU academic, business, and financial communities with the International Solar Alliance. Currently, 7 EU Member States: France, Netherlands, Denmark, Sweden, Germany, Italy, and Greece, are ISA Member Countries. India and France are the President and Co-President of ISA.

With the signature of a joint declaration for cooperation on 11th December 2018, the European Union is a partner organisation to the ISA. The EU supports ISA with concrete actions, such as the development of the ISA’s collaborative and knowledge platform, the ISA Infopedia and solar academy which was launched at ISA’s General Assembly 2019.