Archers and shooters dominated a day of enthralling and high stakes competition at the the Khelo India University Games 2021 today. Thundershowers halted action on the athletics later in the day. 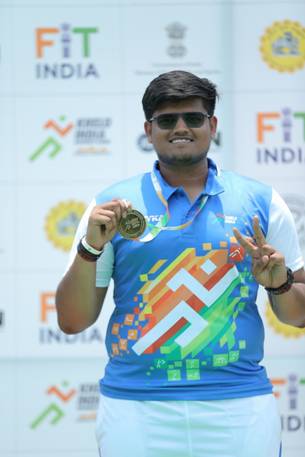 Much before the downpour though, there was a clean sweep of gold — the morning dominated by Sachin Gupta’s archery. The 23-year-old lit up the competition, grabbing three golds in three finals in the recurve archery — the most dominant display by any archer at the games. Gupta, a student at Kurukshetra University kicked off his personal flurry in the men’s singles, beating Yashdeep Bhoge in a close match 6-4. An hour later, one gold became two, Gupta teaming up with Kirti to win the mixed recurve. By the end of the day, he had added the Men’s team recurve gold to his tally. 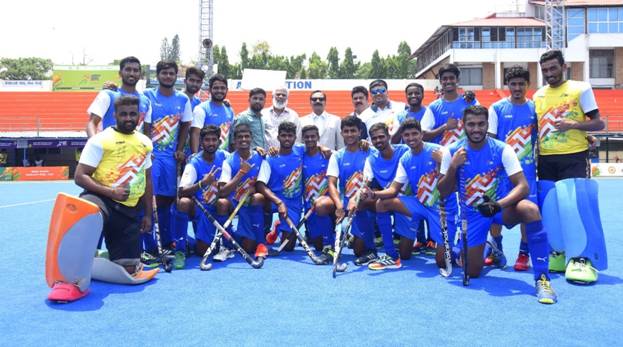 Gupta had returned to competition after a five year break from the sport, and ranked eighth destroyed the competition at the Games. “It’s a great start of the season for me,” he said. “A competition like this, at this time in the year is perfect. It has boosted my confidence to go to Stage 2 of the World Cup.”

Bangalore City University defended their KIUG title in the men’s hockey competition. The final between BCU and Guru Nanak Dev University was played in front of a partisan crowd at the Field Marshal KM Cariappa stadium. The one-sided scoreline was not an accurate description of the tight nature of the match. BCU talisman Harish Mutagar solidified his credentials as one of the players of the tournament scoring two as the local team prevailed 3-0. Mutagar ended up as the top scorer of the men’s tournament.

Speaking after, GNDU’s manager GS Sangha rued his side’s missed chances, but said it would be a good experience for his wards. “We were knocked out in the quarters at the Inter University Championship, but reached the finals here,” Sangha said. “Even today, with a few minor improvements at crucial times we could’ve been on the winning said.” Sangha also credited BCU not just for winning the tournament but also doing so in a dominant manner. “They have been the best team here. Their preparation, gameplay, everything they deserve the plaudits.”

Asian Games gold medallist, Ashish Ballal, watching the final, commended the games for the platform it provided young athletes, and how it strengthened the grass root structure. “As a young player, you can get better only by playing tournaments and matches,” Ballal said. “Otherwise its like studying but never having to give an exam. The Khelo India Games are a great initiative, in the sense that give young players yet another opportunity to gain experience and better their skills.”

PM chairs a CCS meeting to review India’s security preparedness, and the prevailing global scenario in the context of the ongoing conflict in Ukraine