Late Shri P.N. Panicker wanted to remove the evil of illiteracy. He spread a very simple and most potent message – “Vayichu Valaruka” which means “Read and Grow”, said the President of India, Shri Ram Nath Kovind. He was addressing the gathering after unveiling of the statue of Shri P.N. Panicker at Poojappura,  Thiruvananthapuram today (December 23, 2021). The President said that Shri Panicker  made libraries and literacy a movement of the people. In fact, he made it a popular cultural movement. The President said that it is a unique feature of Kerala that in every village, even in the remotest villages, there is a library and people feel an emotional connect with the library in their village or town just as they feel a special connect with the temple or church or mosque or school in their village or town. Libraries created by the movement of Shri Panicker later became nerve centres of all social and cultural activities of which the literacy movement of Kerala is an impressive example. He said that the credit for libraries having a central place in the culture of Kerala goes to Shri P.N. Panicker who connected common people to libraries. He noted that the Granthashala Sangam  started by Shri Panicker with about 50 small libraries in 1945 grew into a large network of thousands of libraries. He said that through this large network of libraries, the common people of Kerala could get to know the thoughts and ideals of Sree Narayana Guru, Ayyankali, V.T. Bhattathiripad  and other great masters. The cosmopolitan outlook of an average person from Kerala can be traced to the library and literacy movement of Shri Panicker. 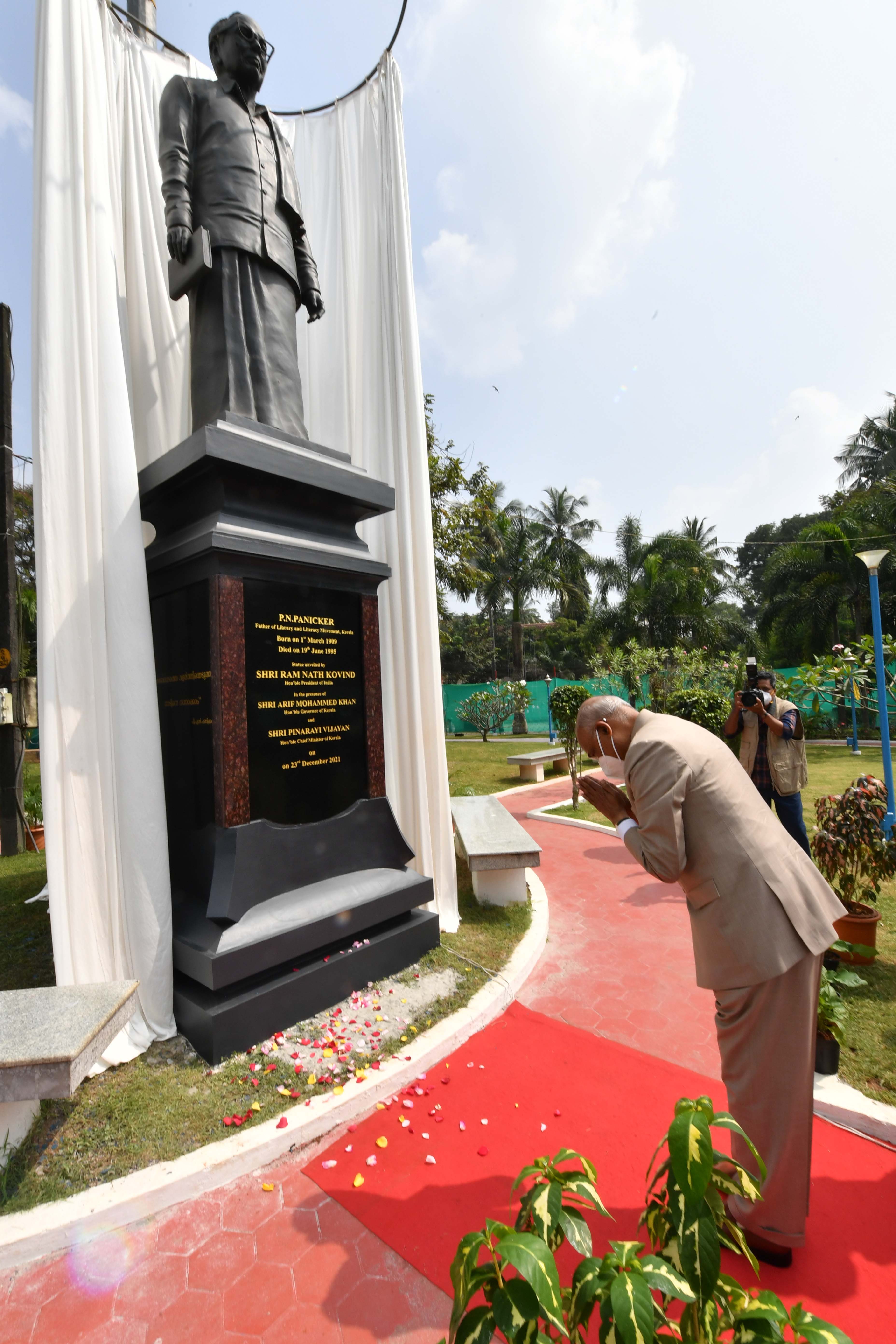 The President  said that Kerala displays India at its cultural and harmonious best. It has attracted people from all parts of the world, absorbed different cultures and religions while maintaining its distinct features. The people of Kerala have earned respect and goodwill in the rest of India and in different parts of the world. The enterprising members of the Indian diaspora from Kerala have not only been sending large amounts of remittances  home but also kept the prestige of India very high in the lands they have adopted as their work-places. The service sector professionals from Kerala, especially the nurses and doctors are highly respected and relied upon by people everywhere. Recently, when the Covid-pandemic affected the entire world, nurses and doctors from Kerala were among the most visible Covid-warriors in India, the middle-east and so many other regions on the globe. The people of Kerala enhance the pride of India. 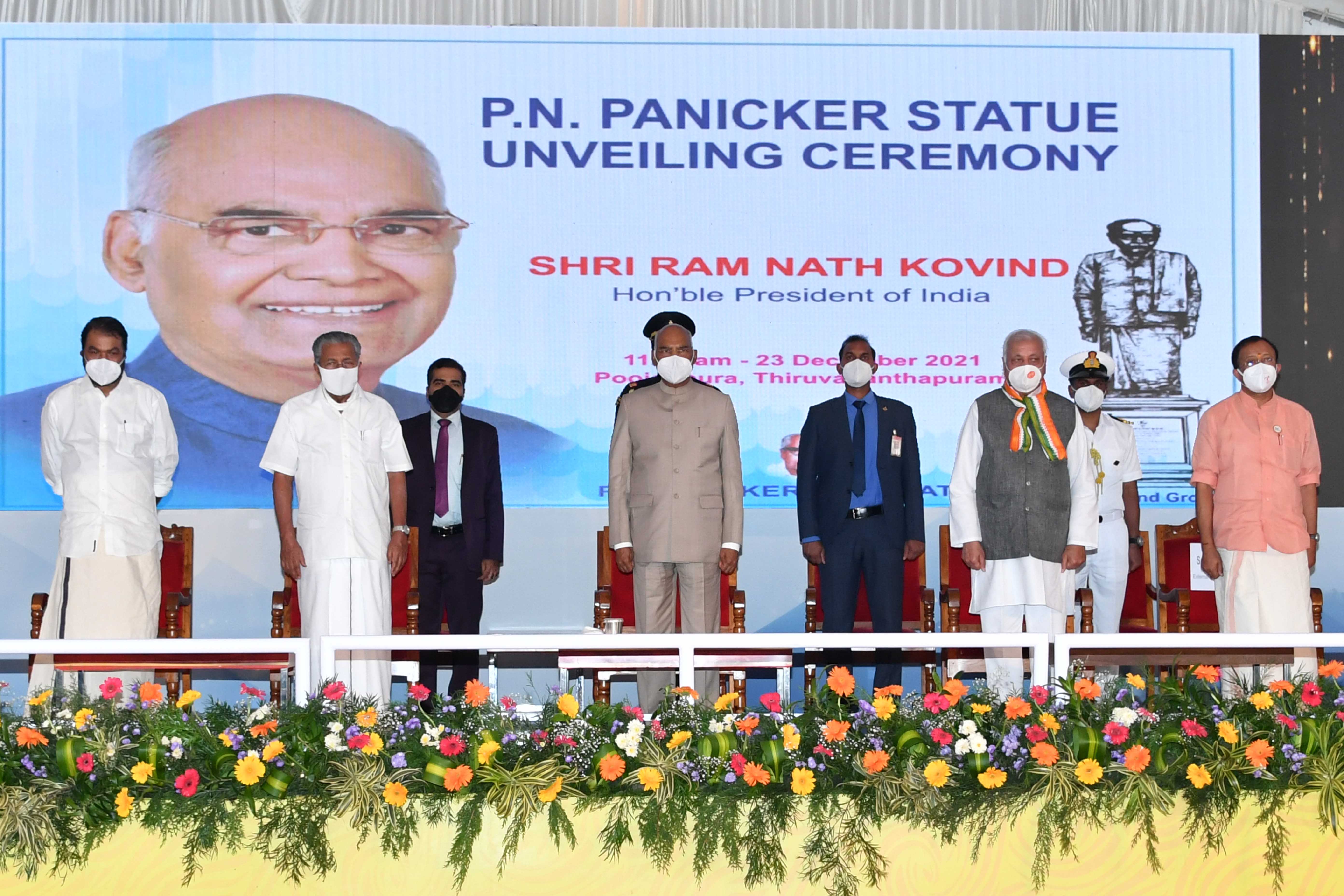 Pointing to the fact that Kerala became the first State to have hundred per cent literacy, the President said that the ‘Sakshara Keralam’ movement became popular and effective due to the foundations laid down by Shri Panicker. The high literacy and education levels in Kerala have had a multiplier effect. Kerala leads other states on several indices of human development, including aspects of sustainable development. He said that successive governments in Kerala have kept sustained focus on the agenda of growth and development. Therefore, the State has maintained its leadership position on several markers of excellence. The President said that observing the punyatithi of Shri Panicker on 19th June as ‘Reading Day’ is the most appropriate way of paying tribute to the great nation builder. Praising the P.N. Panicker Foundation for  carrying forward the mission of Shri Panicker with dedication, the President said that the Foundation is promoting the cause of digital literacy as a tool to realise the cause of inclusive growth. He was happy to note that the Foundation started digital learning in rural areas since the beginning of this century and this effort has succeeded in establishing thousands of home digital libraries. He  appreciated the efforts of the Foundation in reaching the unreached through initiatives like P.N. Panicker National Reading Mission. Referring to a saying in Sanskrit ‘Amritam tu Vidya’, which means education or learning is like nectar, the President said that the Panicker Foundation is distributing this nectar of learning in the entire country.